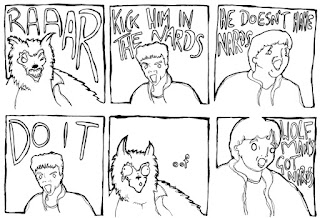 While I had breakfast this morning, I watched the end of The Monster Squad, which was on Sky Movies. It's a film that I used to watch a LOT as a child, back when I lived in Aberaeron (my brother bought his copy on VHS from Aberystwyth's WHSmith) and watching it back now, while it's obviously dated, it's still as good as I remember.

What it also reminded me of was that a while ago -- a year, year-and-a-half, maybe -- I made these two illustrations of an iconic scene from the film for a zine project. But yeah, here I am, finally sharing the pictures I did. As well as the differences in colour between the two, there's also the change in order of the first two panels. Don't know which one I prefer, if I'm honest. 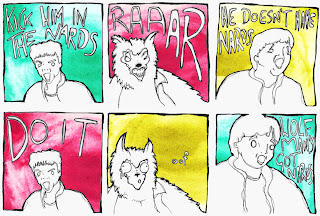