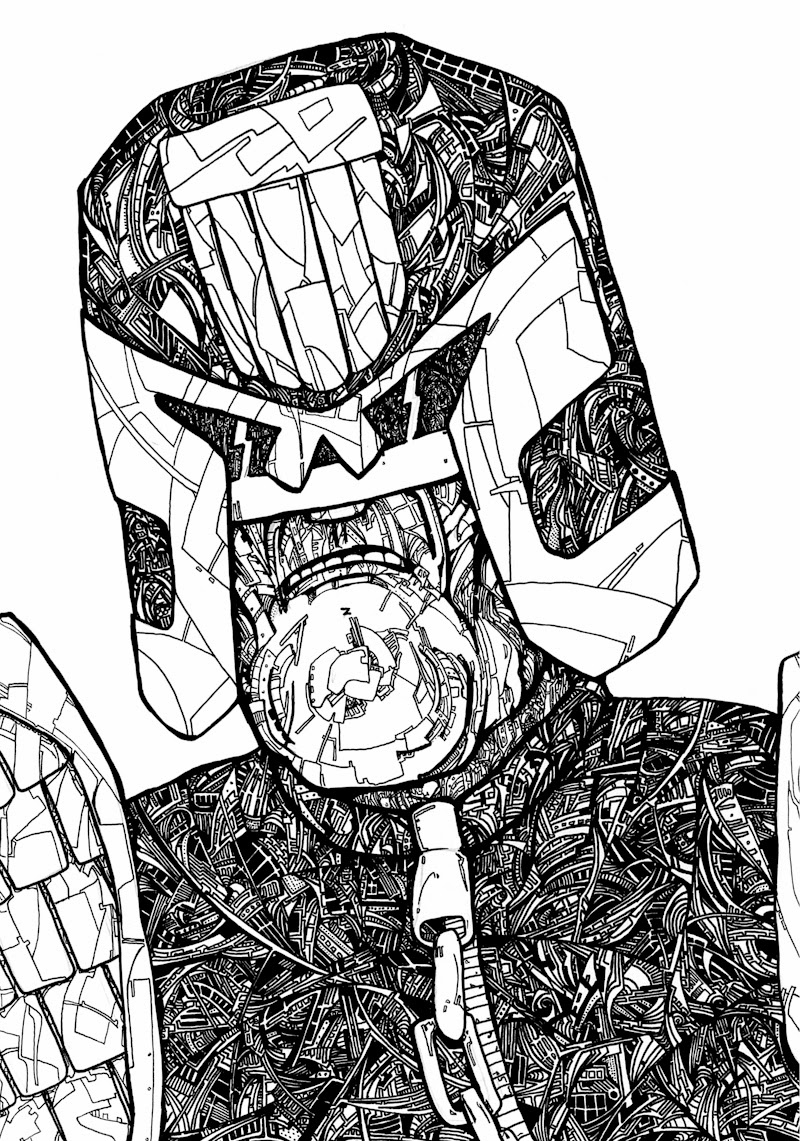 While I was volunteering at London Super Comic Convention I started to think about putting a proper Intercorstal comic together -- a single issue, 30-odd pages, of pure Intercorstal comic work. And I realised that the Intercorstal, on its own, as proud as I am of it, would be a VERY hard sell to a mainstream comics crowd -- the sort of people who spend money at cons and shops.

Figuring I'd need to anchor The Intercorstal to the rest of the comics world with something, I fell on the idea of doing Intercorstal-style portraits of comics characters, and making a small book of them -- buoyed up significantly by how proud I was of the mummy I did for my Secret 7s entry.

Here's the first step toward that -- everyone's favourite fascist lawperson, Judge Dredd. I'm still not entirely happy with this -- I think it works in its own way, but really I'd like it to be more dynamic, which will probably involve finding a more dramatic angle and pose. I'll have another go once I've done some Crosby & Syd pages and had a punt at Batman. Here's some photos of how I went about the finished image, in case you're interested. 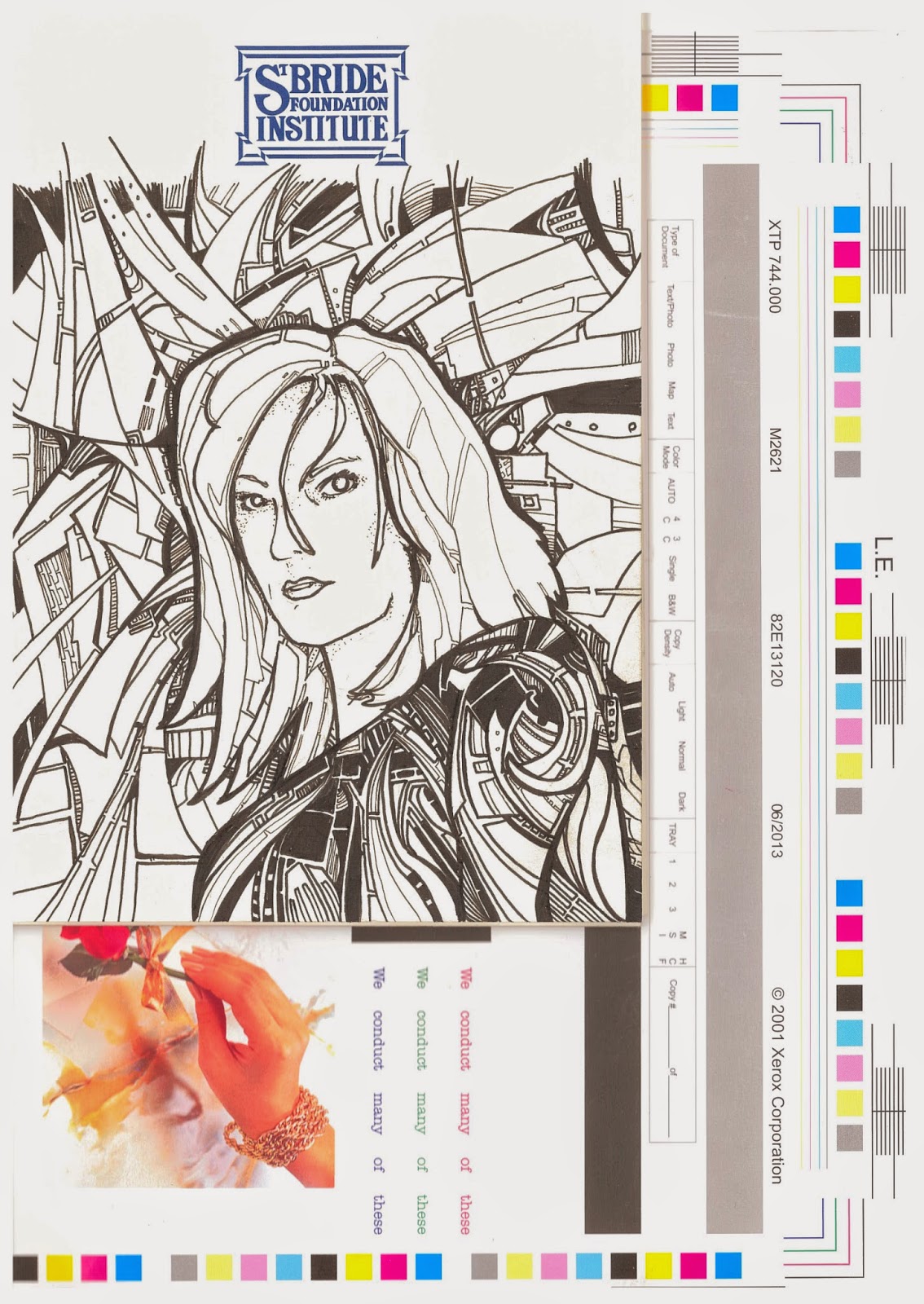 Recently I got back on the horse and did an illustration for home-away-from-home Amelia's Magazine, for an interview with the very talented and inspiring Tallulah Rendall.

The finished, polished-up version of the illustration can be found at the article itself, but as is my way I wanted to share the original scan, because I think it just looks pretty nifty. The illustration itself was done on a St Bride's Foundation notepad because I liked the grain of the paper and the fact that it wasn't brilliant white (which is what I'd normally favour for this sort of thing). Then when it came to scanning, the scanner wouldn't detect the size, so I put behind it the nearest A4 piece of paper I could find, which was a scanning test sheet.

The approach I took was similar to the one I took for my Lorde Secret 7s entry, except I did't have a fortnight to source images and play with textures and spend hours really digging darkness into the page. Also, Tallulah Rendall has blonde hair, so the amount of detail in it needed really lifting off. And then in keeping with the pattern of the hair, the background work became more about movement than density, meaning I could really fill-in the patch of body and arm in the foreground.
Posted by grthink at 04:35 No comments: 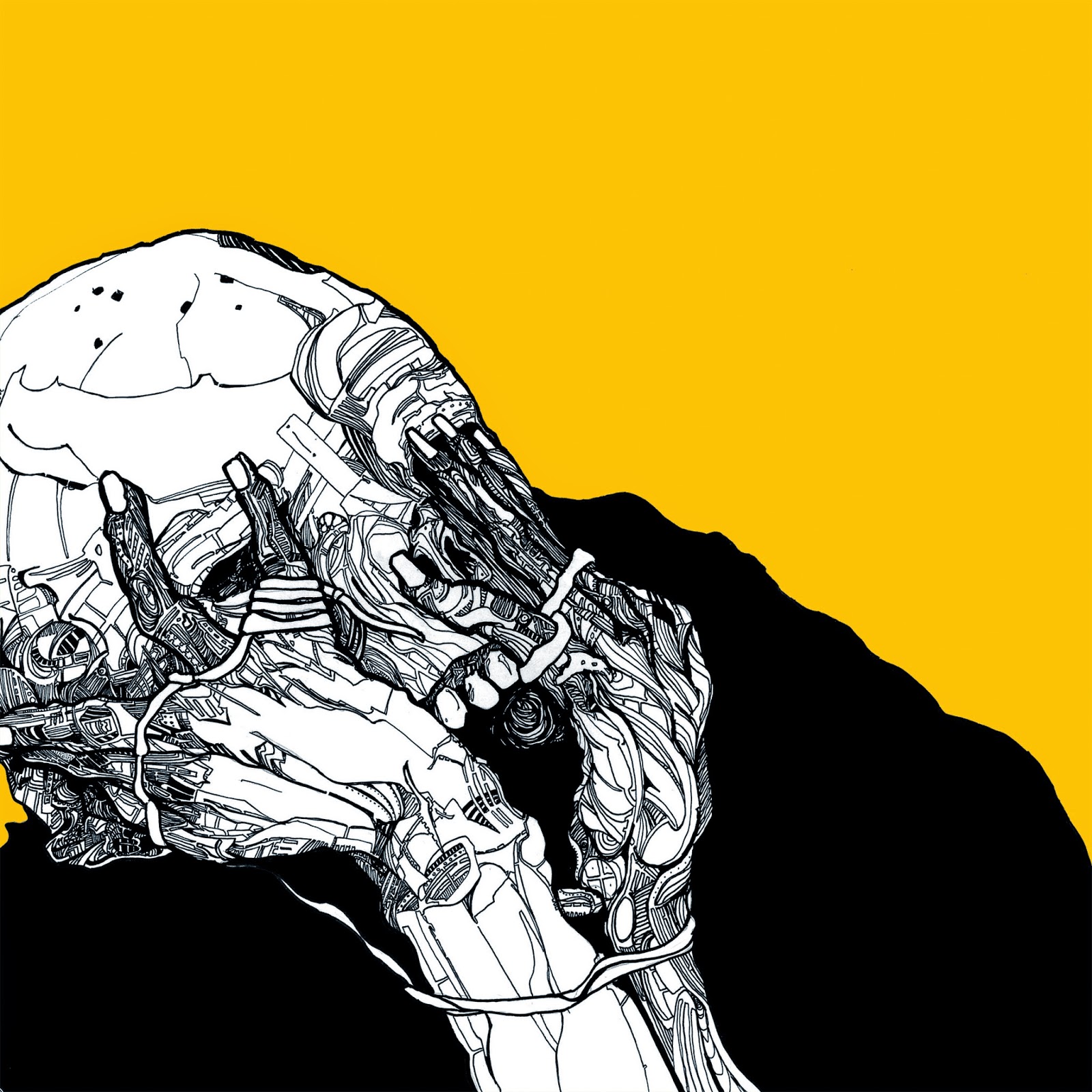 I have been very remiss in not adding my winning Secret7s image to the blog, and here it is! It was entered for Massive Attack's Karmacoma, and is based on a photo of a Peruvian mummy I found on this excellent travel blog: http://kojin.wordpress.com/ I think from a drawing stand-poit, it's the best single piece I've done to this point. I really, really love it, and it looked great printed out.

As I did for my Lorde piece, here are some process images.