EDIT: The offer's still open for people to be sent any of these, for free. The one's that have gone are marked up as such.

Bit of an image dump, but that's just part of #inktober, I guess.

For those not familiar with #inktober, the idea is that every day during October participants do an ink drawing -- a sketch, or something more complicated, it doesn't matter. Just something. I did quite well, considering - as well as the normal inktober stuff I also did a page of Crosby & Syd for the ThoughtBubble art competition, as well as doing a page for Cops Vs Sharkwolves, my sketches for which I've balled up into inkotber.

In all, I managed 28 images, most of which were done on postcards which I'll send out to people if they want them. (If you want one, let me know at gareth@grthink.com and I'll sort you out).

There's some truly terrible nonsense in there. I'm almost ashamed to put that Magneto in there, but in the spirit of 'you've got to fail to succeed' I left him in anyway. But for the most part, it's worked out OK, I reckon.

For the next 3 weeks, up to the 12th November, I'm offering unique, by-request Intercorstal pages to anyone who'd like to commission one, with prices varying only by the size requested.

The way the process works is that you, the Commissioner, email me with details of the comic page you'd like Intercorstal'led (and wherever possible a photo or scan for reference) and the size you'd like it worked up at, and I'll take it through the Intercorstal process (which is covered broadly here). Once it's done, I'll post it to you along with whatever roughs/sketches/notes I've made along the way.

Payments will be by PayPal, as a preference.

What you'll get:
The worked-up Intercorstal page.
A print-out of whatever reference I've been sent.
Notes used during the process - can't guarantee how much this'll include, unfortunately.
Digital copies of the page: 300dpi and 72dpi JPEG as standard, but I can provide others if required.#

Theses prices are at a pretty low introductory rate -- certainly a lot less than page-rate for a normal comic page, and will be going up substantially next year, so if you're interested, now's the time to go for it.

To order yours, or if you have any questions, email me at gareth@grthink.com.

Here are some examples of what you might expect. Also, 'After Smith' is a good place to get an idea of what the finished page might look like, as is 'Neighbours Bring Food'.

'After Smith': The Intercorstal In Bremen

Regular readers will be aware that recently I travelled out to Bremen (which is in Germany) to hang and present 'After Smith', a set of Intercorstal pages all based on comics written by John Smith for 2000AD. It's just over a week since opening night, and with that in mind I wanted to relate, like some kind of society diarist, the ins-and-outs of everything that happened.

The reality is, I doubt you'll want to sit through 3,000 words of me saying how much fun I had, so I'll stick to bulletpoints, and if you get bored halfway through you can skip to the next one! It's the internet age, and I live by TLDR, and I'd understand if you do too.


I'll leave it there, now. If you're still here, and don't know what 'After Smith' is, you should go HERE or better yet just download the free PDF, with an introduction to my madness courtesy of Tom Whiteley.
Posted by grthink at 05:49 No comments:

If you've not guessed from the title, The Intercorstal now has its own website: intercorstal.com

With 'After Smith' opening to the public in a couple of days time it seemed like a good time to give the project its own place, with room for it to grow, as well as to properly collect everything I've done so far.

You should have a look, it's alright.

Below are the two 'After Smith' comparison pages I've been sending out.

I'll tell you what, quietly: I'm really, really happy with how 'After Smith' has come out. 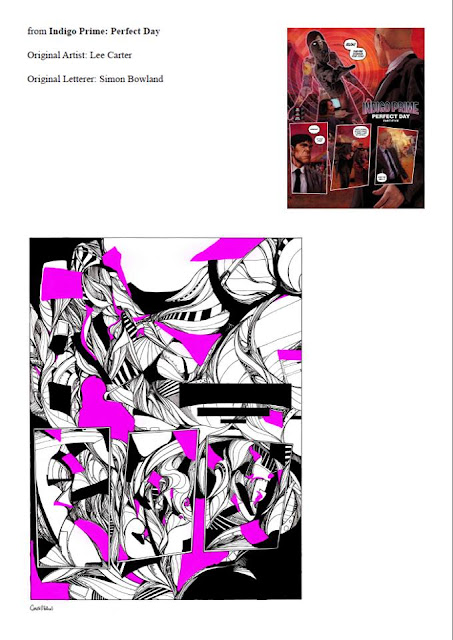 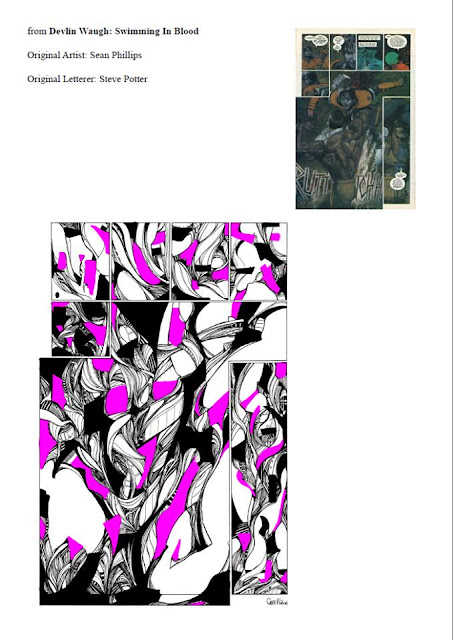 The Intercorstal: After Smith - where I'm up to

"The Intercorstal: After Smith" is a series of artworks reinterpreting comic pages written by John Smith. It will be exhibited at Projectroom 404 in Bremen from 11th September - 4th October 2015.


As announced* in my previous blog post, last month, I'm working on 10 pages for an exhibition which uses The Intercorstal to reinterpret** comics originally written by John Smith for 2000AD. Here's a quick update on what I've been up to. I've broken it down into steps to make it as easy for me as possible -- it's not necessarily chronological.

1. Spent a disproportionate amount of time trying to find the exact right shade of purple marker to use. Eventually I settled on 'Mulberry'.

2. Read and re-read an incredible number of comics to find the exact right pages to steal. The 'Final 10' has changed innumerable times. The last one's still not 100%. There's no set criteria for what makes a page 'right' but I wanted to cover as many artists as possible, make sure each page would work as well when reworked as an Intercorstal one, had made a palpable impact to me at some point in my life, and to look good on its own merits. The final 10 all meet at least 2 out of the 3 final criteria.

3. Measure each page, and calculate how much bigger it needs to be to fit an A3 page. There are probably computer programs that could that for me, or settings in programs I already use, but I did it all with a ruler, a calculator and a notebook. I suppose it felt more 'honest' to do it that way, as a part of me is still worried that 'stealing' pages for The Intercorstal is still somehow inherently dishonest. (here's a blog I did a while ago explaining why I 'steal' pages at all)

4. Asked Tom Whitely, whose blog 'Suggested For Mature Readers' is at least partially responsible for the Intercorstal taking this route***, to write some notes on who John Smith is. He's exceptionally good at writing about comics.

5. I've used my calculations and measurements to transfer the layouts of 9 out of the 10 pages to A3. I've even done the black and Mulberry areas. This is probably the most important part of the project, as it's the actual work, but I've not got very much to say about them yet. Here's 8 of them laid out on my living room carpet:
6. Made a very rash decision to present Tom's writing using a layout stolen from the illustrated text story 'Touched By The Hand Of Brendan', which was illustrated by Mark Buckingham,l appearing in the 2000AD Sci-Fi Special 1991****. I desperately wanted to include Tyranny Rex in 'After Smith' somewhere, but I couldn't find anything that really met the criteria from point 2 (above) quite as well as TBTHOB, and it also makes a handy way to present whatever Tom comes up with. This decision has of course increased my workload somewhat. Here's the cover drawn up, without any text yet, next to the original cover: 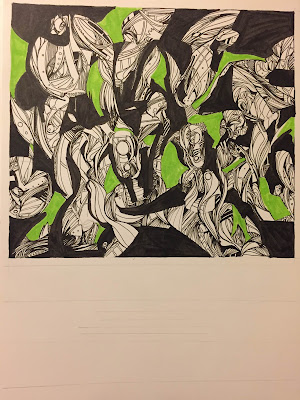 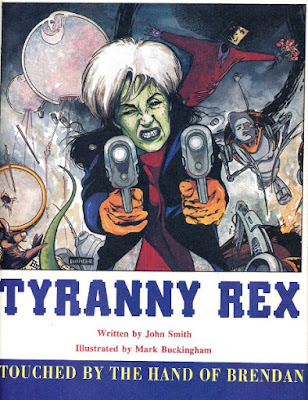 Aaaaand that's it for the moment. All I have to do now is the actual really hard work of turning the blocked-out pages into finished work, with all of the squiggly lines, dots, circles and stripes that entails.

2000AD® JUDGE DREDD® AND ALL OTHER CHARACTERS ARE REGISTERED TRADEMARKS, © REBELLION A/S, ALL RIGHTS RESERVED

Announcing - The Intercorstal: After Smith


2000AD® JUDGE DREDD® AND ALL OTHER CHARACTERS ARE REGISTERED TRADEMARKS, © REBELLION A/S, ALL RIGHTS RESERVED
Posted by grthink at 04:09 No comments: 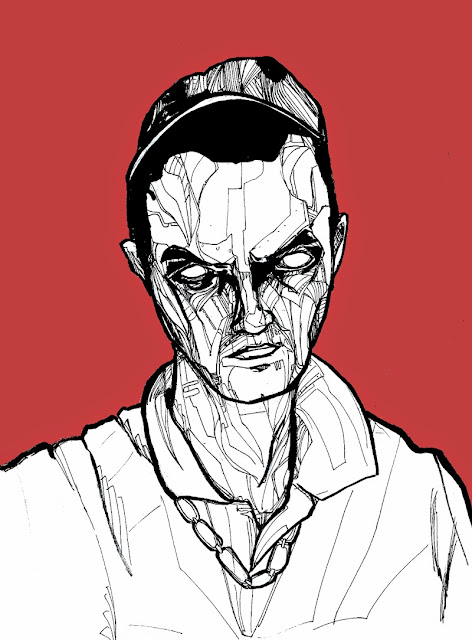 These are a series of images I did on request for a magazine that seems to have disappeared before going to print. I'd initially been asked to do 8 pages of illustrations, said I could do four, and then a pretty full-on case tonsillitis meant that only three got done.

From what I understand the magazine was going to be themed on subcultures of London's East End, and I was given 'chavs' almost definitely because of some illustrations I did for Amelia's Magazine a few years ago. I felt pretty uneasy, especially when looking online for reference, since so much of it is vicious, nasty and horrifically classist. So I tried to make my illustrations monstrous, a reflection of how 'chavs' are viewed, as well as trying to build some sympathy in too -- whether that was successful or not, I don't know.

Earlier sketches and drafts replaced the figure's heads with ant heads, or abstracted tribal masks, but in the end I went with what I know, which worked in my favour. Although, with more time to work on it, who knows what might have been. 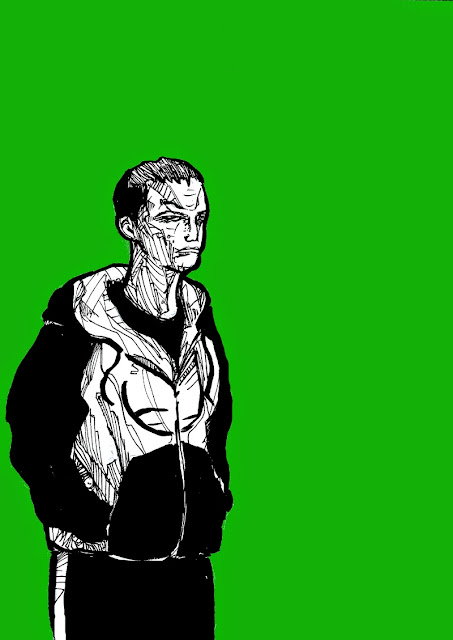 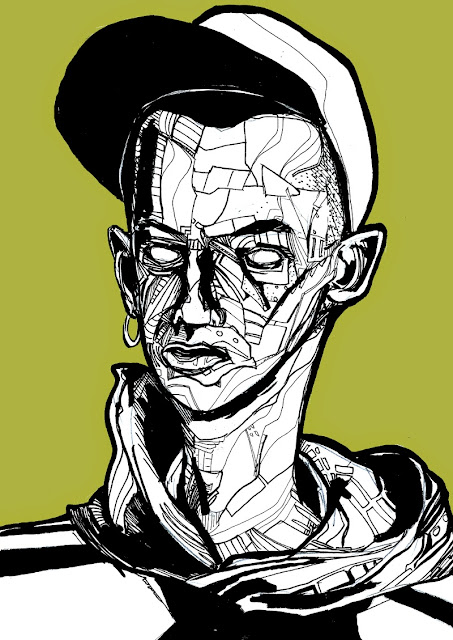