Alison, the curator of the Mail Art exhibition that is running until the 30th Jan, has kindly emailed me some photos from the exhibition, two of which are posted below.

I also got my copy of the free 'zine that the artist Susan Mortimer put together in conjunction with the show and it is superb. The internet version can be viewed here: 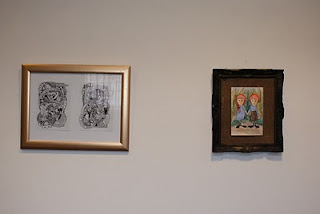 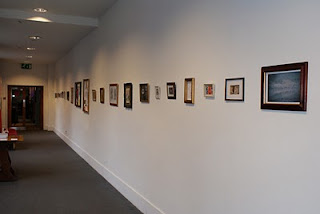 Recently, I've been listening to the Scatman Crothers version of St James Infirmary, pretty much on repeat. It's a song with a long and chequered history, and has been covered by an immense number of artists and bands over the years. There's something about Crothers' version that really grabbed me, though. It's about a man planning his funeral following the death of his lover, but there's something in the way that it's performed suggested a further dimension to me -- that the narrator was planning, experiencing and reminiscing on his funeral all at once, turning it into a Fourth Dimensional Ghost Story.

Inspired, I decided that I'd make something based on the lyrics. Limited, due to a number of factors, to only being able to work on art during my lunch hour at the moment, I've started a series of postcards, each covering a single line from the song. There are four verses and the chorus is used twice, so that's six sets of four postcards, plus a final call-off. I've done the first verse, and the first chorus, and the rest will follow eventually. 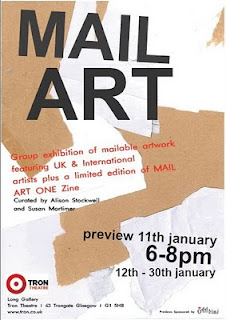 Previews for the Mail Art exhibition that I've got work in are on the 11th January -- if you're in the Glasgow Area, and know where Tron Theatre is, you should go.

The work I've got in it is awesome (even if I do say so myself) and you'll get free wine (and there's usually orange juice on at these things, too).
Posted by grthink at 05:44 3 comments: