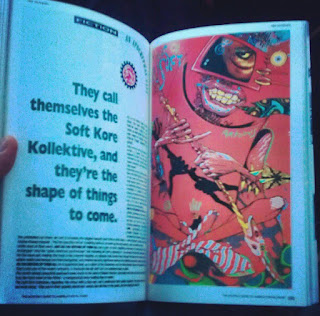 Languishing in my draft posts is my attempt to describe why I've been creating interprative illustrations of Mr Soft. I doubt I'll be publishing it. Instead, here's some source material, taken from "The Complete New Statesmen", written by John Smith. The photo is an illustration by Brendan McCarthy, which I've taken as my cue for my project.

Excerpt from "The Pre-Pubertal Man", taken from "And He The Mother Of Them All".

Lonnie waved up at Mr Soft with a tiny hand, shiny with amniotic fluid, and gestured for him to sit down.
"So," Lonnie said, "what can I do for you?"
"I want a disease, Lonnie. A Kurtzeimer retro."
"You aren't thinking of hitting Harlem again, are you?"
Mr Soft shrugged, and scribbled a skull-and-crossbones in the air with the tip of his crook. Lonnie laughed, the speech module turned it inot a funny rattling sound, like gravel in a tin can.
The laughing must have been uncomfortable for the woman, though, because she moved in her sleep, moaning softly."
Posted by grthink at 05:28