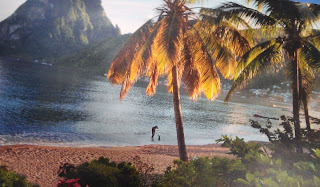 I've just cut up a P&O Cruises brochure to get images as a starting point for another Intercorstal project, which I'll do either as the Mr Soft project finishes, or in tandem with it. This new project will be the fourth Intercorstal-related thing I've done which heavily uses P&O promotional material, having already completed:

Witches which was based on a set of 8 promotional postcards
Valentine, based on a brochure
Mr Soft, which uses cut up pages from a P&O brochure to make comics on two of the project's four final pages. 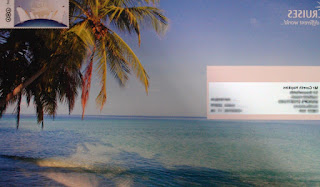 P&O isn't the only company that I've taken promotional images from as a basis to make comics -- Collider used pages from an IKEA catalogue and Butcher's Park was made from an Epic Learning brochure. Oh, and I have a sketchbook made from a Next catalogue. But why do I use these images, and why do I return to P&O so often?

I spend a fair amount of time thinking about this, although precious few people have actually ever asked me. Here's some reasons that I've come up with: 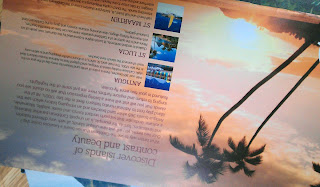 1. The Intercorstal as a project is mostly monotone, and at some point I decided that it needed some colour. I experimented with including colour in the 'traditional' pages, but was never really happy with it. The only 'released' example I can think of is "Taking Advice From Bryan Lee O'Malley" which I did for the second TwitterArtExhibit. So a way to introduce colour is to have it there already, and base the ink work on those. And I think generally it works really well, which is why I keep coming back to it.

2. Those source images are so beautiful in their own right, it seems a shame that they are so easily passed over and dismissed. They're used by the companies involved to inspire particular emotion in order to sell their product -- most people when reading these materials don't pay a great deal of attention to the pictures. Reusing them is my way of appreciating them, making them exist as objects of beauty, rather than just tools to sell cruises/furniture/etc.

3. Nobody does blue sky like P&O. That yawning expanse of pure blue is one of their biggest selling tools -- a place of opportunity, peace, hope, that people can buy into by going on one of their cruises. And it's a great tool to use when you're looking for colour to compliment and act as counterpoint to something like The Intercorstal, which is dense, complicated and often quite violent. 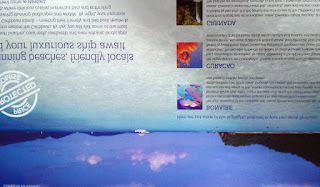 There's probably a hidden psychological aspect, too -- as there is with so much of my work. I mean, I've been on a couple of P&O (one of which I've blogged about here) cruises, and my wife and her family totally love them, but whether there's an emotional reason that I keep returning to them in my art, and responding to their image in the way that I do, is probably best left to a professional to decide.
Posted by grthink at 05:38