I love illustrating London Fashion Week for Amelia's Magazine -- get such a mix of styles to work from and the hectic pace suits my way of working -- if I get a long time for a image it goes two ways: stale or perfect (but usually stale) whereas banging out two images in a few hours without really knowing what you'll be doing tends to inspire. Everything stays raw, which is how I like it, but working from images of polished, expertly designed clothes means that the rawness is tempered slightly.

I especially enjoyed working on Toni & Guy for this article by Matt Bramford, because drawing hair is one of my favourite things, and it's rare to get to focus on it. I agonised over the backgrounds and levels for about two hours, and you can see both final images over at the article, where they really belong. But I particularly liked the 'tall hair' as it came out of the scanner, which I've posted above... it's not the sort of thing that I'd submit to Amelia's as it's a bit too wonky, but I love it. 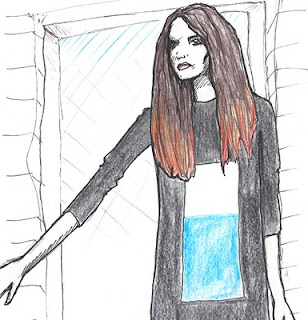 I did this image for a preview of Emesha by Amelia Gregory (in an hour, at the last minute), and really love it, even if my appreciation for Abigail Daker's work is a little too obvious (well, it is to me...). One cool unexpected benefit is that the model that I drew added me as a friend on Facebook. So, you know, I did something right. 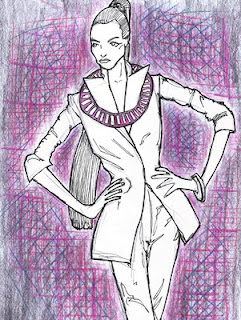 Also did this image of Jasper Garvida for Alia Gargum's interview with the designer. I was chuffed to bits with the figure -- I didn't need to fuss with it or redo anything on it, it just formed there on the page. Trouble came when I added the background, because as try as I might it just didn't work for me. Which ultimately led to me temporarily returning to my old style of adding the background in afterwards for the rest of Fashion week.

I did some more preview ones earlier in the week and have also done a few more already, but will talk about those in a later post. In the meantime , go and read Amelia's Magazine because it's not just the articles that i've illustrated for which are amazing.
Posted by grthink at 15:05 No comments: 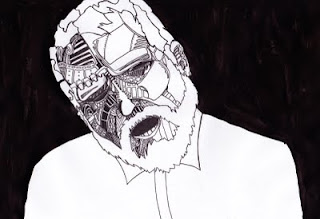 Now that the Chelmsford Arts Trail is in full effect and I've got my display at Man About Town is set up (photos to come as ssoon as I find the camera cable...) I've decided to do a series of portraits of artists/people I admire. The first is sole, a rapper I've been a fan of for a long time now (about 10 years... goddamit I'm old).

I've posted my first attempt, which will probably act as a sketch and a lesson on how not to go wrong. For one, when I 'finished' it he still had he whites of his eyes, but without pupils looked a bit like a zombie. So I added pupils and any intensity in the portrait vanished. So, I filled in the whole of each eye and now it looks worse -- for one thing, there's a shape underneath the eye on the left of the frame that is eye shaped, so it looks like I've put  the eye lower down than I actually did. I'll probably do some work on the shirt, hair and beard next time too.

Anyway, thought I'd share. It's kind of what this blog's for, right?