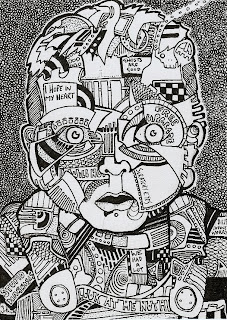 Back in March I posted about having been invited to contribute to Cut-click's first printed issue. I had some of the postcards from St James Infirmary (still to be finished) featured back in Cut-Click 17, also.

Both portraits were a combination of my usual swirly detail style, but using faces as frames to work on rather than geometric patterns. I'm very pleased with how they turned out, and rate tham among the best stuff I've done. They took ages which is why I've dodged doing any more of them since...

Once it's printed and I've got a copy and it's available elsewhere I'll post again to remind everyone... for now, here's what to look for when you're out in the world (cover by Tigzy Rice)

My approach to my work is pretty consistent. I've got a pretty strong visual identity (black ink, patterning, fixed set of motifs) and I usually feel comfortable with that. However, because of a need to push myself, and because I think I have the ability to do different things, I take on other projects.

Recently, that's involved taking jobs from Amelia Gregory for Amelia's Magazine, as I covered in my last blog post. With each assignment, I've grown a little more confident in spreading my wings. And with this growing confidence, I took an assignment to illustrate an interview done with Robin Ince and casually asked if Amelia had any idea for what she'd want. The response I got was a perfectly reasonable "...maybe something inspired by crabs on the rampage with musical instruments and people in trees?"

And so, having done the housework and put my son to bed and had a beer and a coffee, I went on a hunt for images of Robin Ince and crabs, thinking I'd do a picture of Mr. Ince being terrified by an army of marauding crabs. In very quick time I got an idea of how to draw crabs... they're pretty easy. And I found this image of Robin Ince, which could look like he was scared of some crabs:

And then I set to work... I figured I'd do something colourful, so after I'd done what I thought was a pretty passable pencil draft, which I defined with sanguine ink, I set to painting. Once I thought I'd done enough painting, I broke out my black pens and set to working up what I had. Once I was finished, I put it to one side, played some PS3, and went to bed.

At 6:30 the next morning, woken up by my son, I came downstairs and found this: 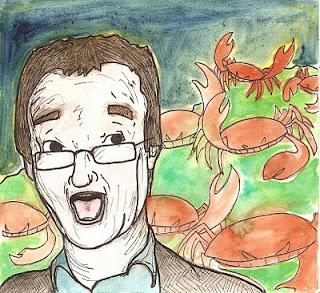 "Oh GOD... it must be early in the morning, because that looks terrible". When my wife came downstairs, I held it up and said "Look at this shit, it's probably the worst thing I've ever done, and I'm including the time I spent as a child". The response I'd hoped for was "It's not too bad, you must have looked at it for too long."

The response I got was: "Well, honey... you're good at what you normally do. Why not try that?" I was understandably appalled. How dare she limit my artistic and creative freedom?! Who is she to try and put me in a box?! Justifiably, I marched out of the room, outraged and indignant. As soon as I was through the door, I knew that she was right, and what I had to do...

First I watered the plants, then cleaned the washing line, changed the bed sheets, cleaned the kitchen, had a sit down... Then, I got back on the internet, and looked for some different pictures to work from, got the printer out, then my lightbox, then worked through my usual process, which involved creating grids with my Tesco Value Geometry set, reading through the interview for interesting phrases, working out how to illustrate those individually, placed those in pencil on the grid, then slowly, bit by bit, working up in pen... and, after about four, five hours, came out with this, which is much better: 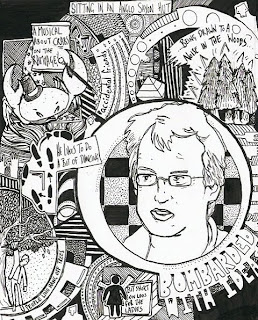 The moral being... um... Don't draw bad pictures? Well, yes, but more than that, I need to remember to be true to myself, and to take my bloody time over these things.

Recently, as well as my continuing work on The Intercorstal (up to page 40 at the time of writing) I've been contributing illustrations to the superlative Amelia's Magazine.

Here they are, along wwith links to the blogs that they've been included in... 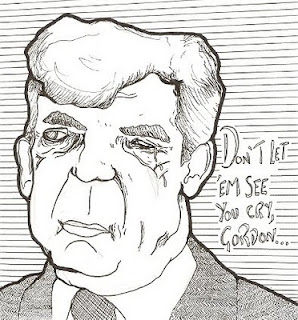 Gordon Brown, for a blog about the election 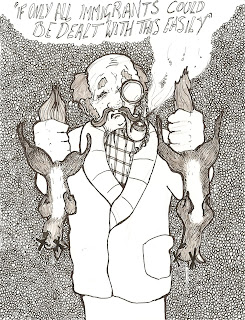 An aristocrat culling grey squirrels, for a blog about Robin Ince's School for Gifted Children 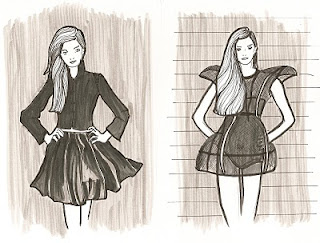 Two illustrations of the fashion of Charlotte Taylor, from a blog about Northbrook and Salford's show during Graduate Fashion Week (only the one on the left got used)
Posted by grthink at 14:20 No comments: