"So, how's things going, with your art?" 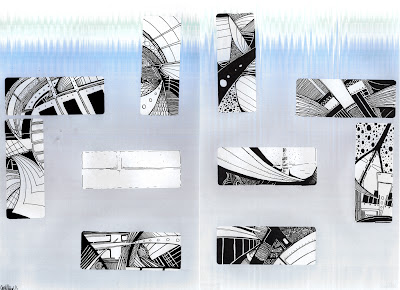 I'm often asked how things are going, what I'm working on, etc. Becasue of any number of reasons, I'm quite reticent to share -- occasionally, I can't remember what I'm actually working on because I'm thinking about what I'd rather be working on, for instance. Or I get flustered trying to explain I'm making an abstract comic by drawing on packing labels that I've stuck to pages that I've rescued out of the recycling at work.

So, here's a quick list of what I'm working on, want to work on and should be working on (as much to help me remember as anything else):

Resyk: This is that abstract comic based on pages nicked out of the recycling at work I mentioned above. The pages were double-sided but there was only three of them, so that's 6 finished pages of work. The first two pages are included at the top of this blog. Trivia: The word 'Resyk' is nicked from Judge Dredd, and is the name for the facility in Mega City 1 where dead bodies are sent to retrieve important natural resources like water and carbon.

Vineland: Last year I managed to come into possession of two tattered 1st edition copies of Thomas Pynchon's Vineland (one of my favourite novels). I've just started making inroads into 'working it up' by drawing on each page, inspired by Tom Phillips' "A Humument". So far I've done testers on the blank pages at the back, but soon hope to start on in full.

The Intercorstal: Elipses: I've been promising this for a year and a half now -- a collected retrospective of everything I've done related to The Intercorstal. I've rescanned all the pages, and ow have to go through the arduous task of formatting them all so they print at least consistently. I'll get it done eventually.

The Intercorstal: Ladythings: A long while ago I won some ephemera from the artist Kye Sanga that I promised to turn into a comic. This included a cheap, torrid little romance book, some Piano tuition books, some beads and a few polaroids of total strangers. I've not made a start, as frankly I've got no idea how to start, but will get there eventually.

The Intercorstal: I still need to do some more 'traditional' Intercorstal pages, to keep that side of the whole project moving. I'm too easily distracted by the lure of detournement of exiting images, though.

Secret 7: At Faye West's suggestion I'm going to give this year's Secret 7 a go. No idea which artist to illustrate for, or whether to do more than one, or whether I'll have time to even get one done.

Mr Soft:  Waiting for the final images to be published, but all the works been done and I'm really proud of what I produced. I've blogged about it elsewhere.

Secret Project: I've been invited to be a part of an ambitious project which I've sworn myself to secrecy over. I've completed one image for it, which is one of the best things I've ever done, but still have to do another nine, at least.

Trolleys: It's not really a project, more of an obsession with instagraming pictures of stray trolleys. But I've started to be sent photos by other people, as also happened when I was maintaining the TrolleyBlog, so something might end up coming of it after eventually. Who knows.

Um, I think that's it. But it's quite a lot. Oh, and I've already started collecting more photos from P&O brochures, and they'll probably get done before some of the stuff in this list...