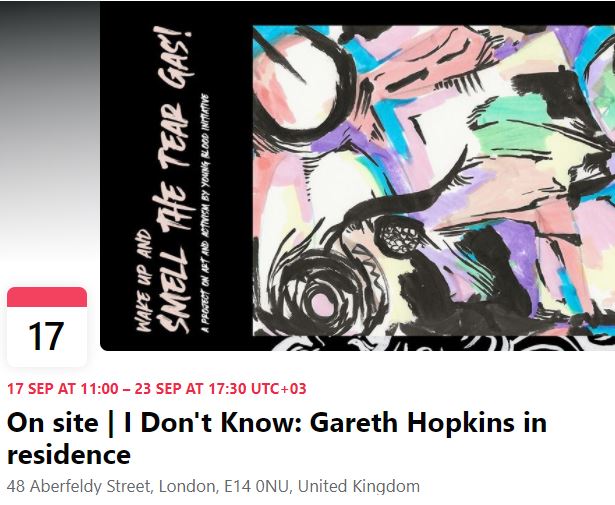 HERE's the updated bit! Basically, what I would have loved to have happen is for me to sit at this location with a stack of srt materials and some hand sanitiser and have people come in, share the space, and make some stuff. But it doesn't look like that's going to be very practical, with the government's Rule Of 6 now in effect.

People should still come down and see me - I'll be lonely AF for one thing, as well as you'll get to see Peter Barnard's installation in the flesh. But I'm going to move it as online as possible, so people can join me over hangouts or Zoom or whatever. I'll schedule in some specific slots for things like 'Eden' and 'The Pledge' and the new, secret, third idea I've got, but for the most part just turn up and chat or whatever.

I don't know what I'm doing - let's just do something.

I tell you this because in FIVE DAYS time (from today, when I'm writing this) I'll be starting my on-site project "I Don't Know" as part of Young Blood Initiative's "Wake Up And Smell The Tear Gas" season of events.

"Wake Up And Smell The Tear Gas" asks its participants to consider their role as artists, and whether activism and art exist successfully in the same space. I'll fess up: I've found this question really challenging, because I use art to deal with things like The Language Of Comics, Do I Like Ghosts and Let's See What Happens When I Keep Drawing Over And Over The Same place, and not 'WTAF is happening right now, and how do I help?'

"I Don't Know" is a week-long onsite residency that plays to that question. I don't know what I'm doing, I don't know how to help - some of the time I don't know if it's my place to help? Like, I literally don't know anything anymore.

I'll be at 48 Aberfeldy Street, London, E14 0NU from the 17th - 23rd September, inviting people (where appropriate, following whatever the current COVID-19 guidance is) to come in and make some art, talk about their opinions, and see what happens. Right now there are three main projects that I’m inviting people to get involved in:

1) “I Don’t Know” – This will be open for the entire week. It’s very much like my previous project “No New Ideas” but with a new starter image, and instead of challenging people directly with the argument that there are no new ideas, instead this time the question is whether people know what they’re doing.

2) EDEN – It feels to me like everyone’s constantly imagining the next dystopia – The Handmaid’s Tale, 1984, Years And Years, to name the first three that come to mind – whilst also trying to come up with solutions to problems that are presented singly – Government lockdown, Brexit, Black Lives Matter. But we don’t think what the world might look like when it’s working, what would utopia look like? I don’t know, so I’m inviting people to draw or make that picture, and share it.

3) The Pledge – There’s a meme that I’ve seen on Facebook, a copy&paste declaration of actions that participants are signing up to. They’re pledges for critical thinking, for anti-government control, for faith in science, but they’re also the opposite of those things. I’ll be inviting participants to discuss the pledges, see where they might be correct or incorrect, and work through what we do and don’t know.

That’s generally it, for the moment. I’ll be sharing the details for how to join in online and offline in the very near future. For the time being, I hope you’ll join in somehow, and I’ll see you in a bit.