This is a blog detailing the effort and process that went into preparing for a show which I missed out on because of forces outside of my control.

A little while ago I was approached by Ibrahim Ineke, an artist/curator based in the Netherlands, to participate in a show he was putting on, in conjunction with Altered Esthetics in Minneapolis. I'd previously been in contact with Ibrahim after he requested a copy of the first Intercorstal comic I put together.

The show was to be a collaborative one between 5 US comic artists and 5 European artists. The idea was that each artist would send a comic of theirs across the Atlantic. They would then choose a sequence, or pair, of panels from the comic that they received and create a large-scale artwork based on the gap, or gaps, between those panels. As The Intercorstal is based in 'the space between spaces' I was really enthusiastic about getting started.

For the project, I put together The Intercorstal: Collider and sent it off. In return, I got a comic back which had detailed plans on how to build a High Tunnel by Maxeem Konrardy as part of a community project. It was the exact opposite of my comic, and therefore extremely exciting to work on, as well as extremely difficult. After a lot of deliberating, I chose two very specific panels to work inbetween, which showed how to fix two planks of wood together end-on-end using a bridging block of wood. The idea was to find the half-way point as the block was put in place and then do some Intercorstal-ly swirls and patterns around it. This quickly went wrong, as I was going to leave any 'physical' objects (i.e. the wood) as empty space, and within 20mins of drawing I'd accidentally filled in that space.

So, I reviewed what I had, and the idea, and went in a slightly different direction, and instead split the image I had into two, to better enforce the idea of the space between the planks and the block, and the action taking place between them. At first, I was gonig to build up the seperated objects onto one final image, but couldn't decide on how they best went together, so in the end they were left seperate. Below are three images -- two showing me trying to decide on a single image, the third shwoing what I finished with. 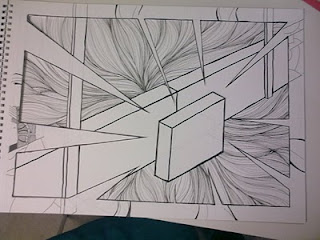 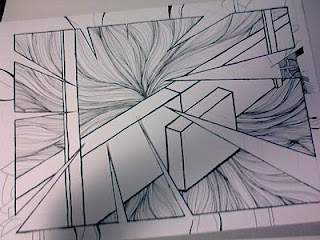 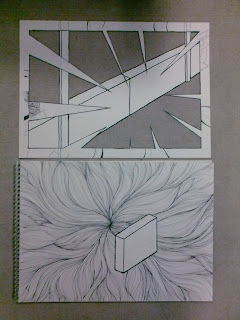 Overjoyed at having finished, with a week to go I packed the whole thing up and sent it recorded delivery to Ibrahim. And it never turned up. The show started, and Ibrahim emailed me to say how sorry he was not to have been able to include my work. A few days before the end of the show, he found out that it had been delivered, the day after the show started, but that he was out and his neighbour had taken receipt of the parcel, and not told him for two weeks.

Ibrahim still has the art, and the stack of Collider comics that I sent along with it, and I've left them with him, because I've not got the room for them really, and with first hand knowledge of how much it cost to post, wouldn't want to put him out by spending the money on sending it back. I'd work with him again in a heartbeat, because I think we're on a similar page, creative-wise, and he's a true gent to boot.

And that's that. Lesson learened, if there is a lesson to be learned.

Edit: LATER THIS SAME DAY: Writing this blog has been very cathartic, and made me realise that although I'm still angry about these circumstances, there's only two things I'd do differently: 1) Paint the artwork, because I left it as white paper with black marker, and I think painting it would have lifted the final piece 2) Fork out the extra for full-on postage. I went for First Class Signed-For, whereas if I'd spent £5 more it'd have been special delivery and the sad ending would have been avoided.

Here's Altered Esthetics blog on their side of the show: http://blog.alteredesthetics.org/?p=477

Britney Sabo was the artist who worked on Collider for Altered Esthetics. Here's a link to her website, and below is a shaky cameraphone photo of her finished piece, which despite the quality of the photo, I think looks aces. 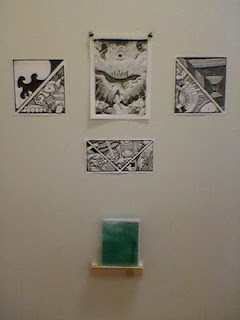