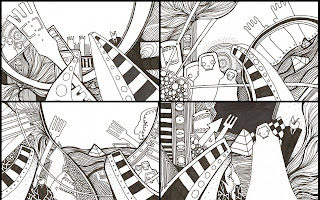 Following on from the 22 Postcards I posted yesterday, here's four which I'm particularly proud of, all depicting imagined landscapes of one form or another. They were much harder to do, and therefore more time consuming, than the other postcards, so I felt they deserved a seperate airing.

Also, news-wise, I'm just about finished on a brand new page for The Intercorstal, with another to come soon after that. I'm also working on a comic based on a script supplied by AnxietyDecending as part of Colaboratay.

Verse 1 and Chorus 1 of St James Infirmary are featured in Cut-Click Issue 17, which is awesome. I'm also working on some other stuff for them, which will be revealed when finished.
Posted by grthink at 04:44