UPDATED 8th Dec:
I didn't win. All the best to the person who did. 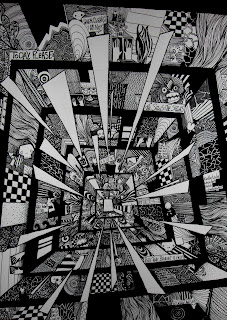 Corridoring, one of the pictures I'm most proud of, which I included in the Operation Concrete artbook and exhibition, has been nominated for the inaugral SayArt.org art prize, which I am very excited about.

It's been honored with a prize once before, when it was selected for a coveted 'Daily Deviation' at deviantart. Eventually, it will also be seen in the short film it was created for, also called 'Corridoring' (it needs editing, which is hopefully going to be done by James Plumb)

Winners are being announced on 7th December, which is only four days away. I'd say 'Go Vote!' but it's not that sort of competition, and emails including votes for my work would probably just annoy the organisers because they're not accepting votes.
Posted by grthink at 05:10