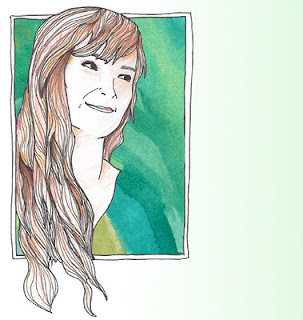 As mentioned in PART 1 this week I've done two illustrations of Laura J Martin for Amelia's Magazine. PART 1 covers the illustration I did for Richard Pearmain's review of a live show. This part (predictably called PART 2) details the process for getting an illustration prepared for Amelia's review of LJM's album 'The Hangman Tree'.

After the image of LJM playing flute in a wood, I was eager to do something a bit more familiar, and had originally planned to do a 'grthink portrait'. After carefully selecting a photo off of the internet, I sketched out what it might look like, and to be honest it wasn't looking good. I'd suspected as much, to be honest -- my particular style of portrait, with all the lines and black ink and abstract shapes ages women in the most unflattering ways. It's OK with men and animals, they can take a bit of extra age, but I've not found a way to get it to work for women. So I toned it back, and played with some more ideas, sellting on a simpler style where all the work goes into the hair, which is still pretty abstracted. 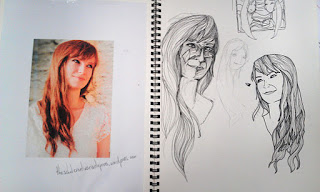 So, I thought I'd do a more finished version of the simpler portrait, and put in a Japanese-inspired abstracted background, becasue there's a lot of Oriental influences in the music, particularyl because of the flute (also, there's a song called Fire Horse which is about a Japanese lovestruck arsonist). And here came my first mistake: For some bizarre reason, I made the portrait a double, with LJM looking knowingly at her own reflection. I still can't remember why I was so sure that this was a winning idea. Anyway, I did the double portrait, and coloured it in, and here's what that looked like: 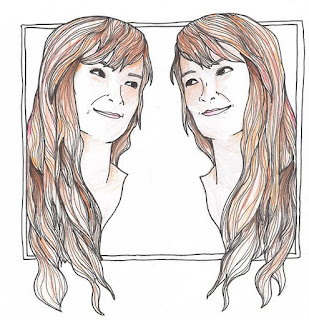 After I'd done that I set to doing the background, deciding to use some of the shapes from one of Hokusai's 36 View Of Mt Fuji as a starting point. In the picture below, you can see what that looked like in my sketchbook.

So. First things first, I deleted the right-hand portrait and moved the border in. Then I played with the background, trying to tile it and layer it and lighten it and darken it and a whole other bunch of stuff, but it wasn't working. So I dumped the background and pulled out another one I had saved. And then considered the space I had, and the sie of the portriat and stuff, and whacked in a light green fade, and was finished.

The lesson I'm going to take from this whole thing: paints. Digital colouring and manipulation is one thing, but in general I get much better results if I've got paint to hand.