This week I've done two very different illustrations of Laura J Martin for Amelia's Magazine, and had a range of stuff I wanted to mention with both of them. So in my sporadic series of 'Process and Frustration' blogs, here's what happened and why. The two articles are HERE (live review) and HERE (album review).

I got involved with illustrating Laura J Martin after seeing a callout for illustrators on Twitter. Normally I'm a bit wary of taking on illustrations of musicians, becasue if I don't particularly like the music I find it really hard to build up any enthusiasm for the project. But I took a look at Laura's soundcloud and she had a collab with Buck 65 on there, and he's one of my heroes which made it difficult to say no. And then when I heard the two tracks on there I was really, really impressed and immeidately got in contact with Richard Pearmain, the writer. And from there I was off, desperately eager to impress.

After listening to the tracks on soundcloud and videos on YouTube, I had an idea of drawing LJM (that's what I'll be calling Laura from here-on-in, LJM. It's just shorter, and avoids the chance that I'm getting unduly overfamiliar with 'Laura' or ridiculously formal with 'Ms. Martin') in a forest, playing flute to woodland creatures. I smashed together a pencil sketch of that, during which the 'woodland creatures' turned into 'imaginary woodland creatures'. 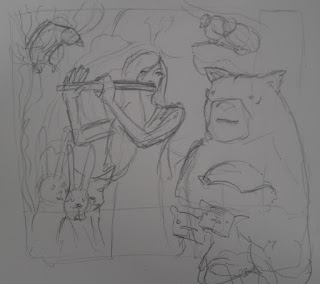 Then I inked it, during which I weirded-up the rabbits, added a bit of details to the birds and accidentally gave the big bear/cat thing a beard. I was stymied throughout the inking process by my pens giving up the ghost and the fact that I might have rushed it a little bit. 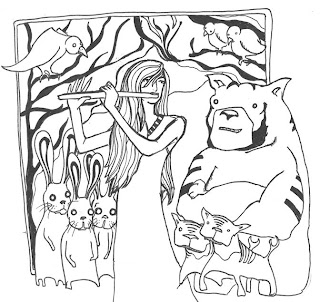 Then came the colouring. I was without my paints or pencils or anythnig like that, so I scanned it and coloured digitally. After a few false starts I decided to give each element it's own gradiated colour, and ended up with the final image. To be brutally honest with myself, if I'd used paint I'd have been happier with this. As it is, it has a certain charm, but I can't help being reminded of Arabic textbooks from the 90's (maybe a slightly odd point of reference, but an accurate one.) 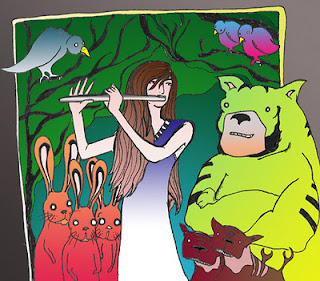 Turned out that this illustration was to be used in a review of a live performacne, becasue as I sent this image off to Richard, another callout appeared. Eager to exploit the chance to do something I was happier with, as well as use the chance to do two very different illos of the same subject, I jumped for that one. Which I'll detail in PART 2.
Posted by grthink at 05:05