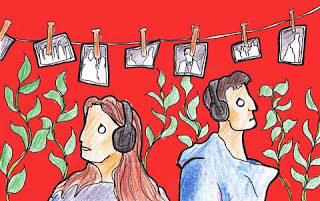 Edit, Monday Morning: This is all cleared up now, and the illustration's going to be used. Doesn't make me any less of a dumbass, but does make me feel a little better.

On Friday afternoon I picked up a callout from a new writer for Amelia's Magazine called Caitlin Sinclair, but managed to miss the deadlne of Sunday afternoon for the simple, amateur, dumbassy reason that I thought the deadline was Sunday night.

The illustration was for a review of a kind of walking-tour theatre show up in Edinburgh called Blood and Roses -- it sounds really interesting, so I'm looking forward to reading the review. Here's the illustration I did, above.

I hate missing deadlines, or producing work that isn't up to par. Those are the things that I live in fear of as an illustrator. I've worked pretty hard to build a reputation for getting things doen quickly and well for Amelia's, so to have fluffed it now is gutting. My best and only excuse is that I've got quite a lot on my plate with Arts Trail stuff at the moment, becasue I've only got two weeks left to do the mega-sized picture of Winnie for Man About Town, and figure out a way to display it.

One thing about this illustration -- it's yet another example of me not having a single style. I mean, I've probably got a 'signature' style, with the swirly black lineart I do most of the time in my personal work, but when it comes to editorial and fashion illustration I seem to be all over the place. I suppose that could be a good thing... at least it keeps doing these illustrations fun and unpredictable.