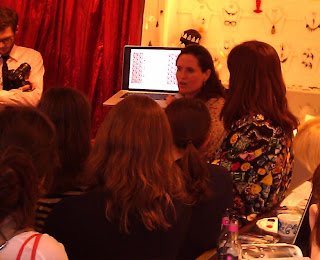 Amelia Gregory during her talk

Last night I headed down to Tatty Devine on Brick Lane to attend the last night of the book tour being run to promote Amelia's Compendium of Fashion Illustration. Armed with the first ten printed copies of The Intercorstal:Valentine to give away to anyone interested in having one, and a selection of my illustration work to show off to anyone interested in looking, I rocked up at about 6:20 and promptly installed myself in the corner out of the way.

Spent some time chatting with Karen who does PR and runs the twitter account for Stepney City Farm -- as well as loads of cool stuff on the 9th July they'll be hosting comedian Paul Foot as he assembles the world's biggest Jigsaw... should be worth a look nearer the time.

Also got to chat for a while to Alia Gargum (aka @onetwothreedraw), who is an amazing illustrator as well as one of the lucky, lucky people to get one of the original black-cover Intercorstal comics (as well as the weirdly long letter I sent out to accompany it). She's also taking part in the Chelmsford Arts Trail this year, and lives very near to my wife's grandma (hashtag: small world).

Amelia gave a talk about Amelia's Magazine's history and her opinions on eco-fashion and social networking to a rapt audience... although 'gave a talk' doesn't really do it justice. Amelia has an apprently unique talent for talking at twenty words per second while still remaining perfectly understandable. If you ever get a chance to see it in action, you really should, it's astounding. (just teasing, Amelia)

Showed off my carefully selected illustrations to Alia and Maria (aka @plasticseconds) who makes really cool jewellry out of rubbish (check out her site here: http://www.plasticseconds.com/) and then spent some time catching up with Matt Bramford and Naomi Law. Also got to meet Tim Adey who regaled me with tales of boredom and madness at sea from his time as a researcher.

I also decorated some biscuits provided by Biscuiteers -- I manned mine up by doing a skull and... an apple. Also had a couple of bottles of very fancy juice from Juiceology.

On the way home I had a bento box from Wasabi and it was a bit rubbish. (Just wanted to drop that in, for no reason other than I've not moaned about it to anyone else).

Here's some photos I took from the night -- they're mostly not very good photos. 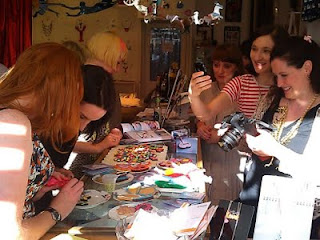 Amelia bothering Alia and her friend with a camera while they try to draw on biscuits. 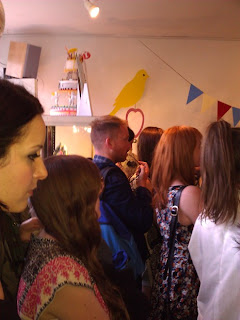 Stalking Matt Bramford from across the room. 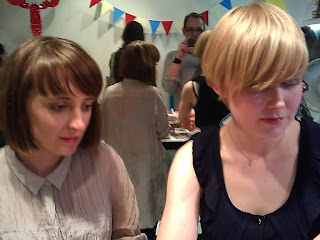 Ladies from BiscuiteersLTD, far too polite to say 'No, really, we're ready to go home now'
(Ignore my amateurish inclusion in the picture via mirror in the background) 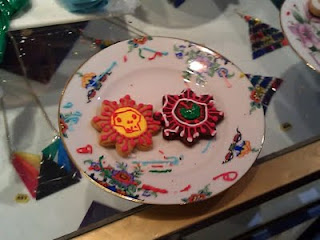 My Skull and Apple biscuits (I only did the bits in the middle, BTW). They tasted bloody lovely. 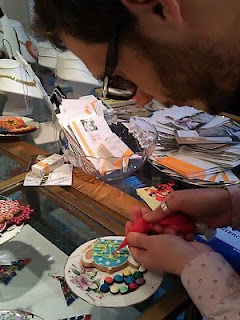 Tim decorates a biscuit. Not shown: Amelia being very critical.
Posted by grthink at 04:36