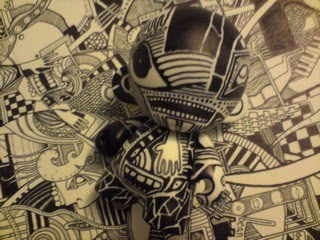 A few days ago I reached an important milestone in the 'Intercorstal' comic project -- I finished my 32nd page, which leaves me exactly a third of the way through my 96 page target! The fact that the 96-page-target was totally arbitrary is both a source of great pride and tragic woe in my life.

Other than a feature over at the superlative Abstract Comics blog, reception to The Intercorstal has been lukewarm, to say the least. These are three of the possible reasons I've come up with:
1) People don't like it because it's very rough around the edges, poorly done, unproffessional... etc. I'm not sure whether that's true, but it's a very real possibility.
2) People don't 'get it' -- a comic set in the gaps between space and conciousness which has a repeating set of motifs at its heart in place of characters, which has no easily discernable plot is possibly not something that most people will spend time with if its intentions aren't entirely clear -- especially on the internet, where it's so easy to pass things over.
3) I've not explained the project enough, or left enough information about it around, hence (2).

Despite the lack of public reaction, I've decided to be beligerant and carry on regardless. An unfinished comic which nobody likes is worse than a finished one, in my opinion.

Also, I've started collecting text to use as dialogue/exposition, by both letting my own mind wonder free to find short sentences and phrases and by jotting stuff down as I hear it in the street. I'm now researching the best way to deploy this text, in particualr finding ways for it to randomise, and I'm also thinking about how I'm going to go about getting it printed up.

If anyone's got any opinions on the project, I'm either emailable (gareth@grthink.com) or you can use the comments fields here, at the Intercorstal blog, or over at deviantart.
Posted by grthink at 21:55