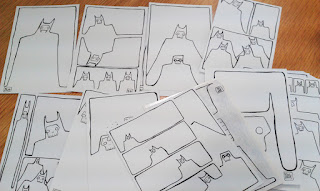 I'm taking part in the very exciting HEADS UP group show in Chelmsford, organised by The Shiny Shed Collective, which takes place between 19th and 27th May. I'll be using the space I have as an excuse to show off The Intercorstal in a gallery context, as opposed to the short comics and zines which have been done so far. I'll also be unveiling my first 3D piece, which is a kind of semi-installation, which I'll go into more detail when the show starts.

On sale there will be a collection of postcards of Batman Ghosts. Essentially, they're the Ghosts that I've been including in my work for years now, but with Batman's ears built in. In some of the scenes, I play up to the Batman side, in others I don't. No two are the same and I hope to have at least 50 done by the launch of the show. I've given up on the idea that I'll have scanned them all beforehand, so here's some photos of a few of them.
Posted by grthink at 05:25