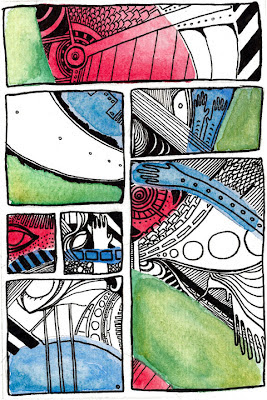 Here's my submission to the 2nd Twitter Art Exhibition, being held in Moss, Norway, in April 2012. It's being organised by David Sandum, with all money from sales of artwork going to The Women's Crisis Center in Moss. Full details of the submission and event can be found HERE: http://davidsandumart.posterous.com/call-for-artists-2nd-twitter-art-exhibit-in-m

There wasn't any particular theme, but I thought it'd be cool to work on some advice that Bryan Lee O'Malley (creator of Scott Pilgrim) posted on his twitter feed:

I'm past knowing whether I followed that advice or not, but I was thinking about it while I worked on the page. Once I've had a chance to think about it a bit I might be able to make some sense of it in the context of my other comics work. As it stands, though, I'm pretty happy with how it turned out, and regular readers of this blog will know how terrifyingly rare it is for that to happen.
﻿
Posted by grthink at 06:00