I've just posted Page 51 to The Intercorstal blog. It's very chicken based, and that's only really half on purpose.

I was flicking through the sketchbook I'm currently using for pages of The Intercorstal and found some sketches I did of the Stepney City Farm's animals as prep for the Paul Foot Jigsaw Madness flyer a few months ago. There was a page with three sketchy chicken heads on there, all faulty in one way or another (the drawings were faulty, not the chickens) and I thought it would be interesting to use my own sketches as a base for a page, considering I've used so much else recently (P&O brochures and postcards in particular). This is what it look like to start with: 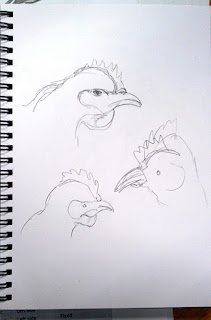 Then I drew a grid over the top of it and set to work. When I was working on the grid I used some smaller, square frames having been really impressed with the layouts in P. Craig Russel's adaptation of The Sandman: Dream Hunters which anxietydescending got me as an early Christmas present. It's pages like this one, courtesy of Comic Book Resources, that I was thinking of:
And then, yeah, I laid into it. Normally I'd work on The Intercorstal while watching TV or a film, but since moving house I've now got a desk to work at, which is much more comfortable, but there's no TV. As background I put on Alan Moore's reading of Unearthing which helped a lot, but there came points when I naturally needed to take breaks to free up some ideas. These ideas came from stuff I had lying around, and their influence is much clearer in this page than in others (which is why I thought it might be interesting). 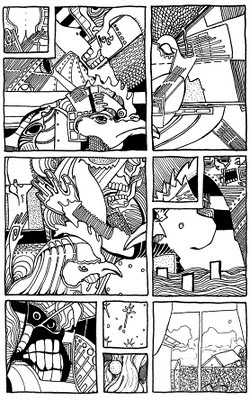 Here's a run through of what's in there, other than the chickens, that didn't come directly out of my brain:

Top-right panel: There's an eye-shape near the inner border which I took from a Sandman toy that Anxietydecending bought me a while ago.
Centre-left: In the top-left corner of the frame there's a hand holding a box (you can only see the bottom of the box) which I copied from a photo I had of a Communist Chinese statue of a worker -- the dimensions are true to the sculpture.
Bottom-left: A set of lips copied from a photo of a Chinese statue of Marilyn Monroe.
Middle two on the bottom row: Details from the aforementioned Sandman toy.
Bottow row, right-hand side: A line drawing based on a photo of the view through my mum's patio windows. This was the last frame I completed, and I thought the relative simplicity made a nice contrast to the rest of the page while still being full of Intercorstally shapes.

This is the first time I've gone into this much detail of my process on an Intercorstal page -- if you've got this far I'd appreciate any feedback on whether this is something you'd like to see more of? There are still patterns and shapes and characters in this page that I could wang on about, as there are in all the Intercorstal pages, so if there's any interest whatsoever I'll try it again for Page 52.