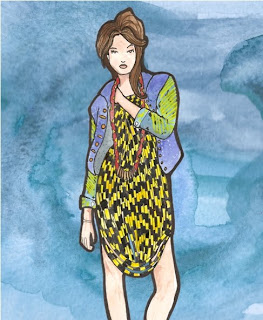 Amelia's Compendium of Fashion Illustration has been avaialble in the shops for a few weeks now, and with only a couple weeks to go until the official launch party at 123 Bethnal Green Road, I figured now would be a good time to recount some of what I went through when preparing my contributions...

I was asked to illustrate the articles for two designers -- 123 Bethnal Green Road (you can see that image and a preview of the article HERE) and Dr NOKI. I wasn't really familiar with NOKI before getting the assignment, but only a cursory glace at some of his designs convinced me that his designs were right up my street -- very subversive, and vicious in the way that they repurpose branded clothes. In conversation I've gone as far as to say that he's doing to modern clothing brands what Dada did to post WW1 art... which I don't think is too much of a stretch.

Immediately I wanted to make a very violent, dischordant image to match his designs, but I was also very aware that the image needed to sit within the framework of the other fashion illustrations that I'd done over the previous months and also within the illustrations done by the other illustrators. (Once I've got a few projects off my plate, I'm going to go back and illustrate some NOKI designs off my own back, I think).

In a departure from my normal work, I also didn't have a specific image to work from -- instead, Amelia went to the NOKI shop at 123 Bethnal Green Road and took some photos of the clothes, with some suggestions on how I might style them. I flicked through some old fashion magazines that my wife had left in the bathroom for an appopriate model to work from, and after getting the pose down I added the clothes on afterward.

Early on, I ran into a problem -- overtired from work and desperate to get the image finished, I added too much water to my paint when working on the face and in trying to correct it managed to eat away at the paper. This meant that the paint dried in a weird way, which in turn made it look like the model had a nasty rash, as can be seen from the original scan, below: 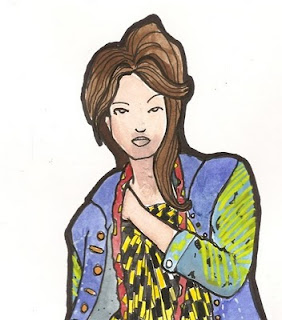 To correct this, I traced the face and hair, and painted and inked that (very, very carefully). I scanned that in, and through the miracle of photoshop, was able to replace the offending areas. The new face can be seen here: (I also took the opportunity to give her a little more personality than in the original, by giving her thicker eyebrows and the hint of some eyelashes) 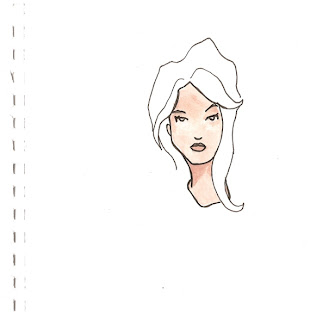 The other major hurdle I faced was getting the background image right -- it's no secret that I photoshop the background in after I've done the figure (well, most of the time) but I couldn't get the right background. I was very, very tired when trying to get this right, and positioned as I was in a strange hypnagogic state came up with some very odd ideas. By the end, I'd gone from painting backgrounds to painting scenes from my favourite books, including Gravity's Rainbow and Call of Cthulu. I scanned these in, played with the colour balances and dropped the model on. Here's a selection of the images which came out as a result: 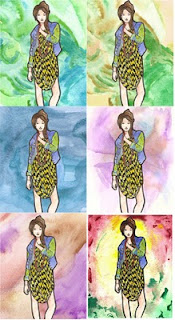 The final one chosen was a blue background, which was actually a detail from an illustration of the climactic scenes of All Familes Are Psychotic. My personal "favourite" was the one you can see in the bottom-right of the above selection -- at the time, I thought it looked like the model had just appeared from another dimension, like some sort of Fashion BVM, but it's actually a ridiculous image in a whole bunch of ways, especially when it's at print-size.

Of all the images I've made recently, this is one of my favourites, though. And that's regardless of the work that went into it -- I just like the way it looks. And it looks especially awesome in the book, which every sane person should own a copy of... You can buy it here, didn't you know?
Posted by grthink at 08:06