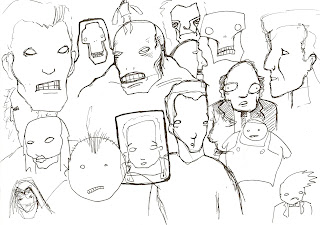 I was asked earlier this month to provide an unpublished artwork for Cut-Click's first printed issue, and jumped at the chance. The brief was pretty open... A6 and portrait, which I misread as 'a portrait, A6 sized'. I did two portraits in the end, one of them a self portrait and one of my son Bill, and have sumitted them both, so I won't post either until the issue's out (if I've been accepted). However, before I settled on doing portraits of myself and Bill in the style that I did, I did a series of quick sketches to generate ideas... and here they are. I like some of these, they might crop up elsewhere.
Posted by grthink at 19:05